Looking Back on 40 Years

A little before the holiday season in 1978, Girl Scouts leader Patricia Funk had an idea for a service project: Her troop could help feed neighbors in need.

Funk, a leader of passion and action, reached out to the Community of Congregations to help launch the project. The interfaith organization said yes, and the Scouts went to work bagging food to give out.

That year a handful of families had meals for the holidays. But Funk and her troop didn’t stop there. They continued feeding neighbors who were hungry. Calling their effort the Hunger Task Force Food Pantry and based out of Faith United Methodist Church, they soon reached 40 families a week.

Originally a short-term idea, this volunteer community operation grew into what is today the Oak Park River Forest Food Pantry.

“We didn’t think that what we were doing would live for 40 years,” says Sarah Jolie, a member of Funk’s troop. “We knew people were hungry, and we knew we wanted to do something.”

After Funk’s troop disbanded, Pat Koko took over the hunger relief operation, which expanded its mission to provide food year-round.

1990 Koko sorts food in the church classroom where the Pantry first set up operations.  The Pantry later moved to a storefront on South Boulevard in Oak Park.

In those early days, the inventory and distribution system was crude, tracking food and recipients with plain index cards.  The new Pantry began receiving one-a-month USDA commodities as a Greater Chicago Food Depository member agency.  But deliveries could sometimes be delayed.  Once when the delivery truck broke down, Pantry volunteers rented a U-Haul truck and went to GCFD to pick up the food themselves.

Two volunteers, Leah Beckwith and Karin Pietrini, ran the Pantry after Koko. They laid the groundwork for today’s organization, moving it to its current home at First United Church of Oak Park. By the time the Pantry passed its 25-year anniversary, more than 2,500 families annually were being served.

In early 2008, the Pantry hired its first two staff members — co-directors, Russell and Michele Zurakowski — at 15 hours per week. 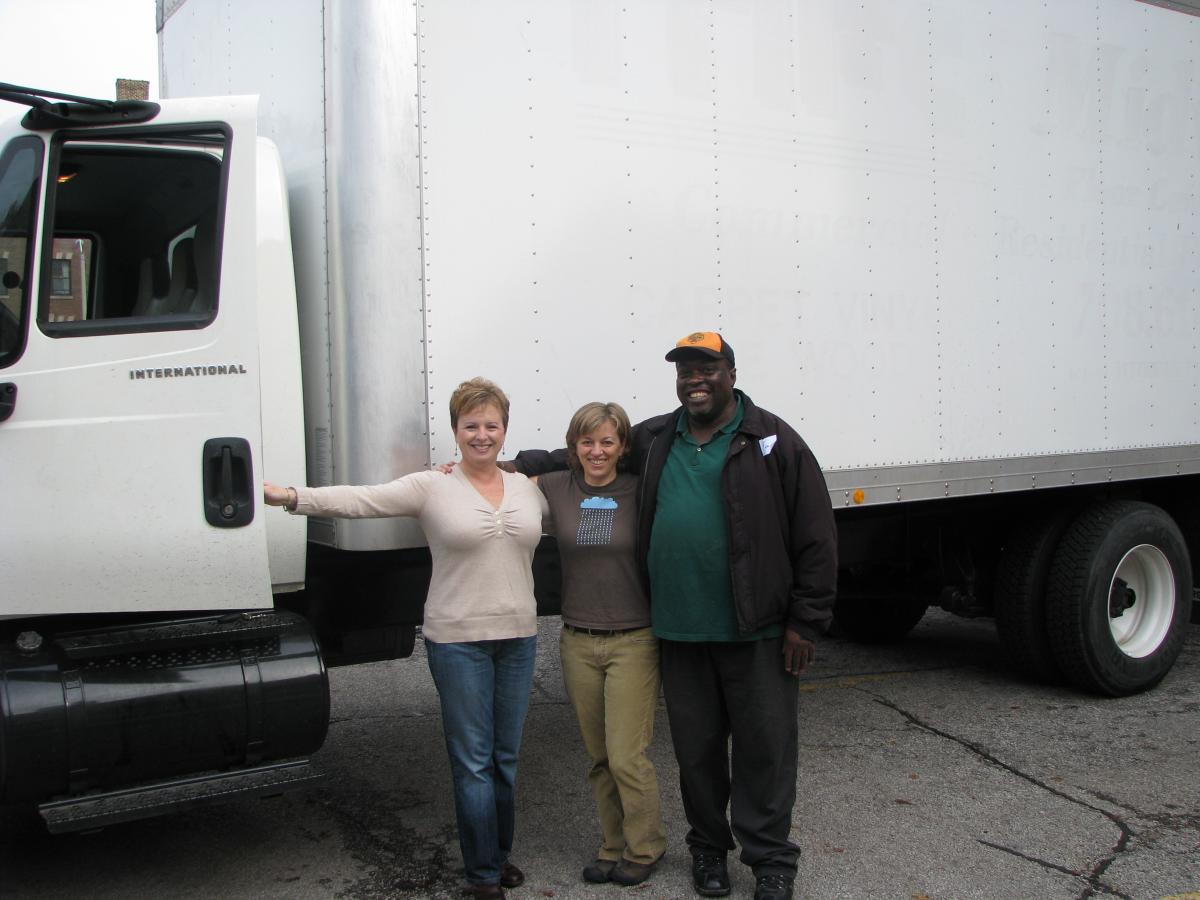 By 2010, the Pantry served nearly 15,500 families annually. It has secured 501(c)(3) status, formed a board of directors and implemented a solid fundraising and volunteer infrastructure. It also added anti-hunger advocacy to its portfolio.

The Pantry was growing in capacity and reach — hundreds of volunteers and donors and thousands of pounds of food donated. It had a $100,000 budget, a new client-choice service model and provided nutrition education. Two more paid staffers came aboard.

In 2012, Russell stepped down and Zurakowski became the full-time executive director, a role she continues to fill. Beginning that year, the Pantry made food insecurity its focus. It increased the amount of food distributed and the nutrient content of that food. It extended programs that set people up with the skills, knowledge, and resources to achieve food security.

Zurakowski calls these “Beyond the Basement” programs because they meet different populations where they are instead of centralizing them at the Pantry site. The Summer Meal program feeds kids when school is out. Home delivery assists seniors and people with physical and mental health disabilities. The Pantry also connects families to income-support benefits and provides cooking and nutrition education. 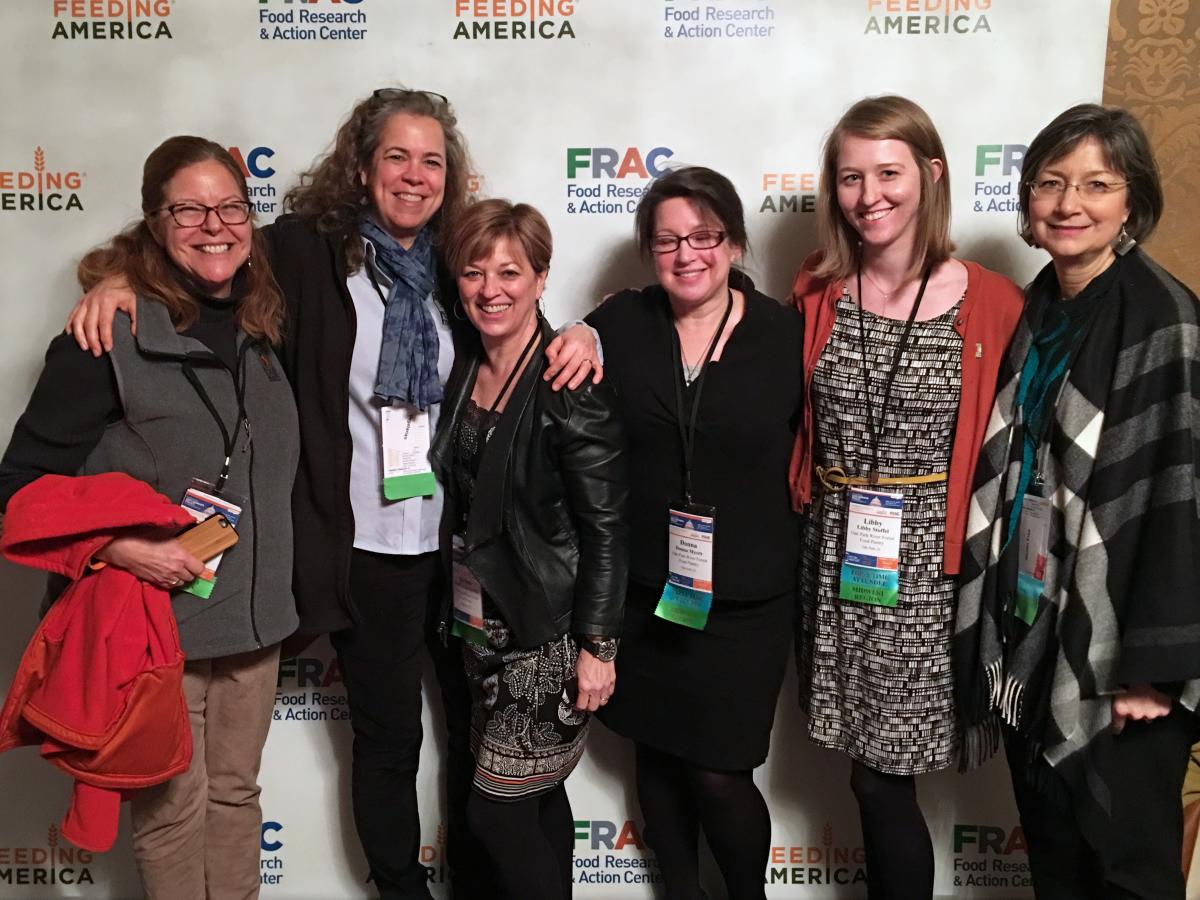 2018 Board and staff traveled to Washington D.C. for the National Anti-Hunger Policy Conference and lobby day where they met with our national representatives. From left to right, Board President Betsy Backes, Board Vice President Stephanie Schrodt, Executive Director Michele Zurakowski, Board Member Donna Myers, Communication Lead Libby Stoffel, and Board Treasurer Melanie Halvorson.

Many, many meals since those first holiday baskets, the Pantry has been there for its neighbors in need. It ends its fourth decade with a pledge to make sure no one in the communities it serves goes hungry.