In the News: Hockey Huskies raise $16K for Beyond Hunger 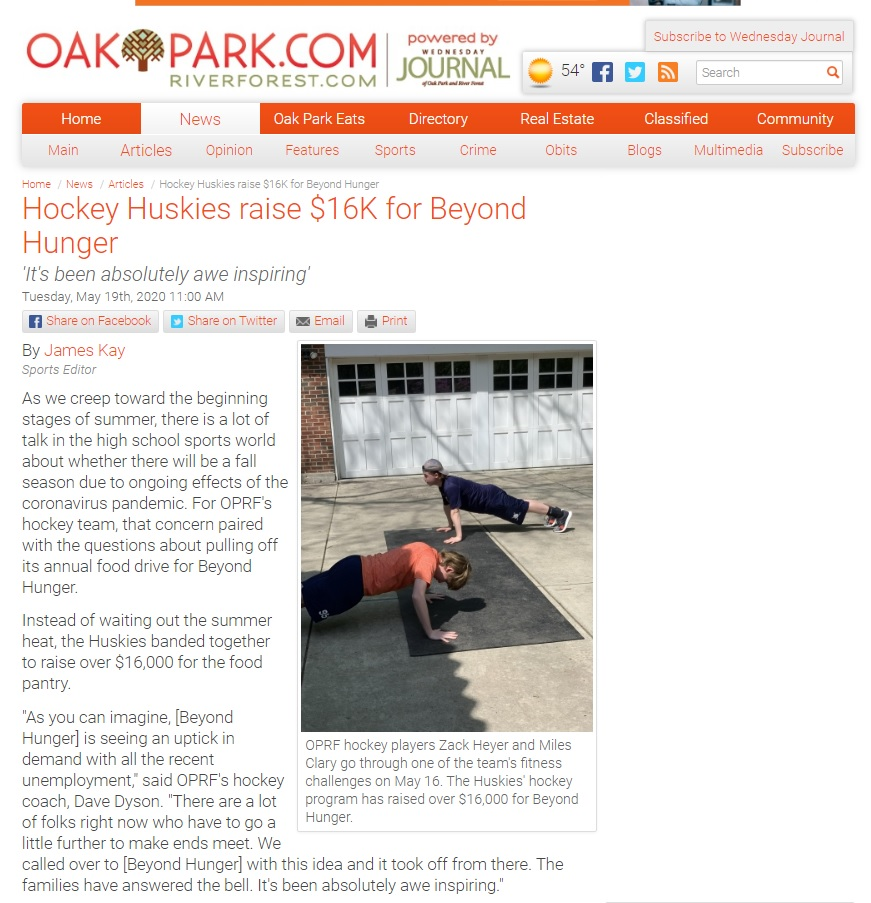 Dyson rallied his team by putting them through fitness challenges to raise funds ranging from running a 5K to doing 100 pushups, squats and crunches. Because of social-distancing protocols, the group couldn't do the challenges together. They did one of the challenges on May 16 and are still looking to raise more money.

Even at a young age, the players see how significant the cause is to the community.

"[Beyond Hunger] can't accept food right now and can only take monetary donations, which is different from the food drive we usually do," said OPRF player Zack Heyer. "This is the best we can do in the meantime."

"I think everyone was sad when we first heard we weren't going to have a season," said Clary. "We were ready for summer to get stronger, better and prepare for next season. Everyone is just really anxious to get back on the ice. It's been great being able to stay together and keep interacting since we haven't been able to see each other."

Initially, Dyson set the goal at $2,500 ($1,500 coming from him and his wife, Mara) and thought the community would be able to hit that modest mark. Within a week, the team raised over $11,000. With their food drive in jeopardy this fall, the team is satisfied with what they've been able to do under these dire circumstances.

"By September, we want to get back to a little bit more normalcy where we can do our actual food drive," said Dyson. "Until then, we want to do everything we can for those who are in need right now."

Michelle Zurakowski, the executive director at Beyond Hunger, was taken aback by how the hockey team responded in a time where every donation can make a difference.

"We want to wish a huge thank-you to Coach Dyson and the hockey team for seeing beyond themselves," said Zurakowski. "I think it's sort of a spiritual practice almost, in terms of doing things that are beyond who we are as individuals for this greater good and they're just such an exemplar of how to do it right."

You can find the link to the hockey team's food drive HERE.