In the News: With pop-up restaurant foiled, 8th grader made COVID cookbook 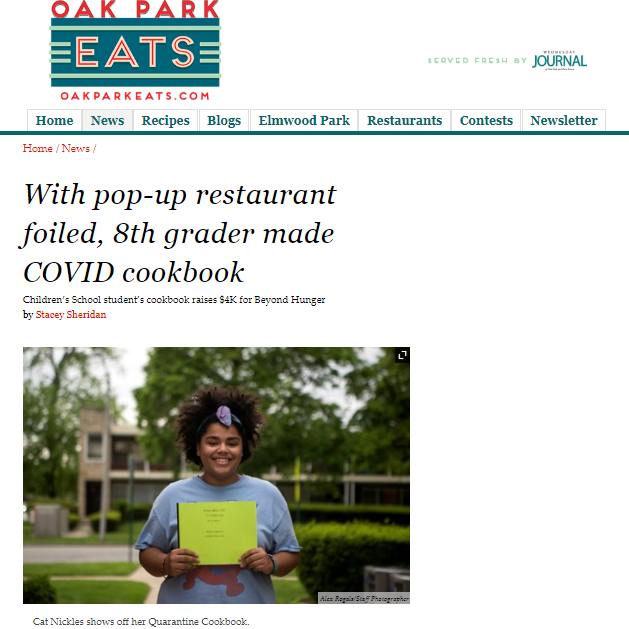 A student at The Children’s School in Oak Park, Nickles created her cookbook for her eighth-grade capstone project after her initial plans for a pop-up restaurant in her school’s gym were foiled by the COVID-19 pandemic. The profits from the pop-up restaurant would have gone to Beyond Hunger.

Nickles knew right away she wanted her project to benefit Beyond Hunger. For as young as she is, Nickles has a long history of giving to causes that benefit those in need.

“Most of my birthdays since I can remember have always been to a charity, so I’ve always raised money,” she said. “I would prefer to help someone who doesn’t have the resources.”

The cookbook contains “simple recipes for socially distant days,” as described by the book’s tagline, made with easily accessible ingredients; Nickles’s personal favorite is the recipe for chocolate peanut butter shakes.

“Quarantine Cookbook” is available by donation online for those interested in dishing up and dishing out for Beyond Hunger. Those who donate can choose to have their copy in PDF format or a traditional hardcopy.

Nickles’s hard work has quite literally paid off. As of May 29, “Quarantine Cookbook” has amassed $3,820 in donations sent directly to Beyond Hunger; that money translates into nearly 12,000 meals for Beyond Hunger clients.

“We’re really grateful that Cat used Beyond Hunger as part of her project,” said Sarah Corbin, Beyond Hunger communications director.

Beyond Hunger has seen an increase of roughly 35 percent in pantry usage since the COVID-19 crisis hit the Chicago-area, according to Corbin. The funds generated by the “Quarantine Cookbook” have helped feed thousands of people experiencing food insecurity.

“We feel embraced by our community and it is very apparent because of Cat’s project,” said Corbin. “It’s really wonderful to see people come together to support Cat, to support Beyond Hunger and to take care of their hungry neighbors.”

Nickles said she’s proud of herself and proud of the community for helping her raise that amount.

Inspired by the comic book style of Hugh Amano and Sarah Becan’s “Let’s Make Ramen!” cookbook, “Quarantine Cookbook” has delightful hand drawn pictures done by Nickles herself to illustrate the preparation of each recipe. Amano and Becan were among those who donated to Beyond Hunger through Nickles’s cookbook campaign.

Nickles’s fundraising cookbook has caught the attention of many notable Oak Park residents. Oak Park Eats editor Melissa Elsmo and Amanda Daly of the Daly Bagel both contributed to the campaign.

The support has come as a very welcome surprise to Nickles, who decided not to suggest a donation amount per cookbook copy.

“I wasn’t expecting to get as much money as I have now,” she said.

A lot of the support has come as a result of free advertising in the form of people sharing her campaign on social media.

“In the first few days, it blew up and it was great,” she said. “It was passed on through Facebook pages. It was really cool.”

Newsletters sent by the Children’s School, 200 S. Oak Park Ave., also promoted the “Quarantine Cookbook” campaign. Many of the school’s faculty members have donated to her campaign.

“It’s pretty obvious when you look at the donations coming in how supportive the Children’s School community has been of Cat’s project,” said Corbin. “That support has been amazing.”

Beyond Hunger also issued a media release to promote the campaign.

While she enjoyed the project, Nickles is unsure whether she will be pursuing a future career as a cookbook author.

“I don’t know if I would want to make more cookbooks,” Nickles said. “What I want to do in the future is I want to open a restaurant. Not like a big one. Just a small one you’d see on a corner. Or a food truck.”

Donations can be made at https://www.classy.org/campaign/cats-quarantine-cookbook/c285362.