In the News: Senator Don Harmon delivers food to those in need 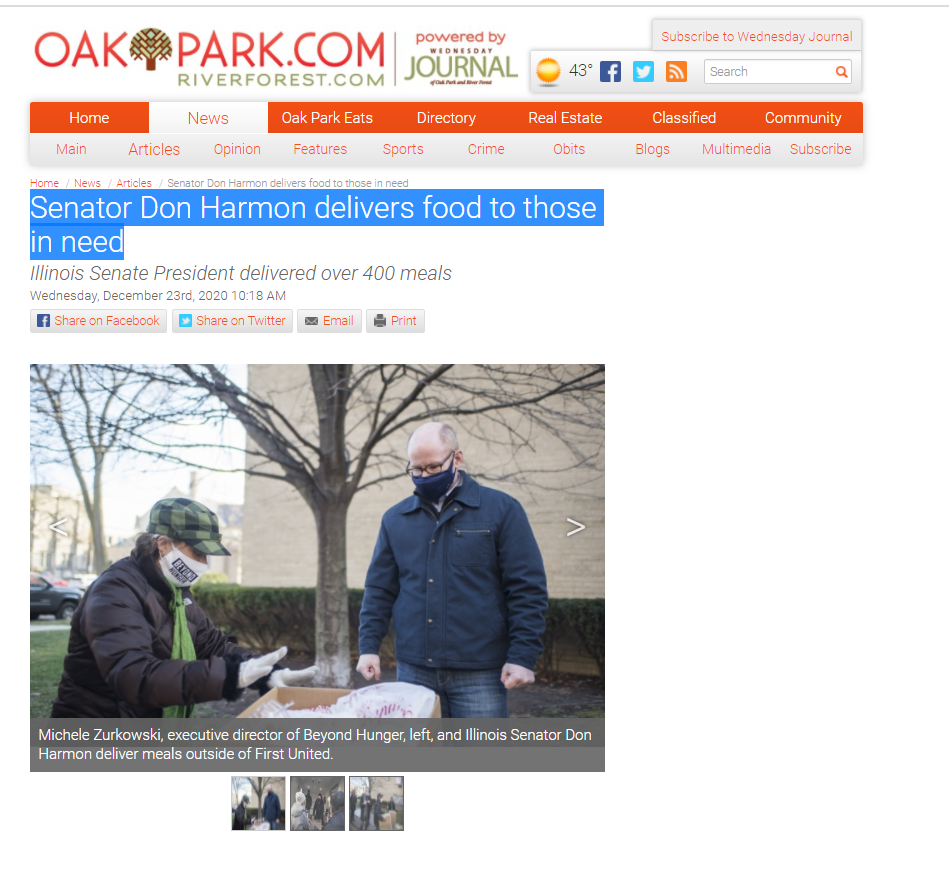 Santa may ride a reindeer-pulled sleigh to deliver Christmas joy, but Illinois Senate President Don Harmon rides a minivan. On Dec. 21, the senator and his team made special trips throughout the area, handing out hundreds of meals to local organizations, enough to feed roughly 902 people.

Paid for by Meridian Health Plan of Illinois and prepared by Bailey's Catering, Harmon connected with Meridian after it reached out to local legislatures asking for advice on which community groups could most use the food.

"It was a lovely offer," Harmon told Wednesday Journal. He said he took part in the event to provide food to people in and around his district that might not otherwise have a good meal during the holiday season here.

"I so appreciate [Meridian's] generosity and was happy to connect that generosity with the constituents I represent," said Harmon.

Harmon and his team kicked things off at noon, delivering 41 meals to the New Moms facility in Oak Park.

"We are grateful that Senator Harmon and his team thought of New Moms [and] to deliver the additional meals to our families," said Jenna Hammond, New Moms communications director.

The cuisine caravan then gave out 50 meals to the West Side Ministers Coalition for its senior program, before heading over to PCC Austin Family Health Center to drop off 140 meals for first responders and healthcare workers.

Some special guests came along for the ride and to lend a hand, including Harmon's chief of staff Eileen Lynch and the man who prepared the scrumptious meals of turkey, sweet potatoes and pecan pie.

"Robert Bailey, the chef, was in the van delivering with us, and it was nice to say hello," said Harmon. "He evidently spent a year or two at Proviso High School and ran into a classmate in the middle of our deliveries."

Harmon said the chef and Bailey Catering did a "wonderful" job preparing and packaging the meals, with each individual meal able to feed two people.

The final distribution depot was First United Church in Oak Park, where the senator and the team passed out 175 meals for Housing Forward clients and residents of West Cook YMCA.

Housing Forward staff, including executive director Lynda Schuler, greeted the senator and picked up the food, which Housing Forward clients ate for dinner that night.

"I think it's very safe to say, what a nice way to have a little early holiday celebration, and especially when it's so generously donated," said Erik Johnson, Housing Forward communications director.

Johnson said he was impressed with the cross-section of organizations Harmon was delivering meals to.

"I just thought it was such a nice way to support the community," said Johnson.

After distribution duties were fulfilled, Harmon headed over to the Write Inn, 211 N. Oak Park Ave., which Housing Forward has leased for its interim housing program, for an abbreviated tour.

"We were thrilled he could make the time to come over," said Johnson.

For his part, Harmon found the new housing operation remarkable.

"I'm impressed," said Harmon of Housing Forward. "It sounds like COVID has pushed us into what may be a superior model."

Harmon found the change from a rotating shelter model "really encouraging" because it offers much more stability for people experiencing homelessness than moving from church to church on a nightly basis.

"They do really wonderful work there and I'm hoping that this a sensible model they can maintain," said Harmon.